One of the many perks of working for a company such as FNTS is the ability to evaluate, test and prototype new and emerging technologies.

If you follow trends within the technology industry, you likely have heard about the transition to the “Third Platform” – If not, I believe you will soon begin to hear it used as casually as other common buzzwords: “Big Data”, “virtualization”, “Cloud Computing”, etc.

The Third Platform is being coined to represent the next major shift to occur within the computer industry.

The First Platform represents the “mainframe” era.  Systems built and designed to support 100’s of applications for 1,000’s of users.

The Second Platform represents the “client server” era.  Systems built and designed to support 1,000’s of applications for 10’s of thousands of users.

The Third Platform represents the “mobile” era.  Systems built and designed to support 10’s of thousands of applications for billions of users.  These systems are capable of delivering applications 24×7, to anywhere in the world, and from any device.

Envision an App Store for your business – Similar to Apple’s App Store. 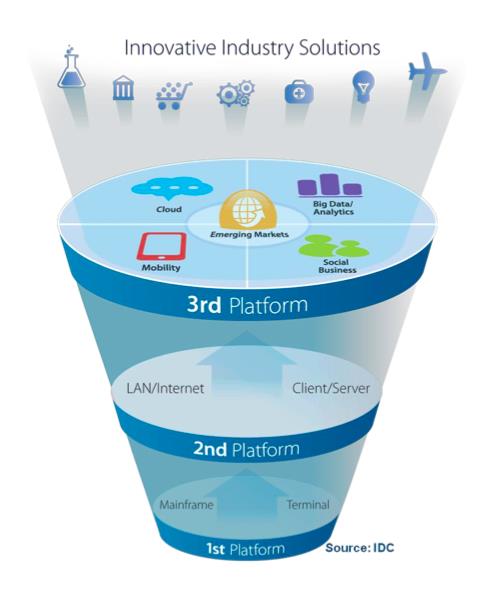 A common platform from which Developers are capable of creating next-generation applications, Users are able to securely subscribe and run these applications, and Business Units are simultaneously able to perform real-time Big Data Analytics – Anytime, anyplace, and from any device.

If this is indeed the beginning of a seismic shift within the industry, new companies such as Pivotal (http://www.gopivotal.com), will likely rise up and become the next big industry giant.