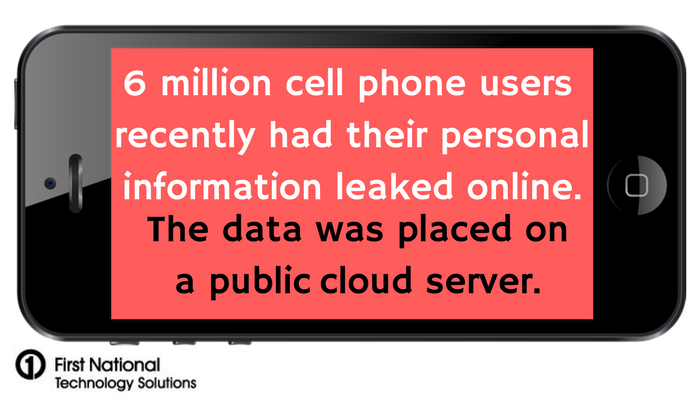 Desktop anti-virus software is still an important component of a defense-in-depth posture and aids in keeping endpoints secured, but the vast majority of protection focus has shifted to securing information stored online, primarily on infrastructure in cloud environments. Because of the shift, precautions and safety measures need to be taken into consideration.

Due to the potentially sensitive nature of information stored in the cloud, every server comes with measures that reduce the risk of potential threats. First National Technology Solutions (FNTS) owns and operates data center and cloud services that store data for a large number of organizations. To keep the data secure and in-compliance with industry regulations, FNTS provides security services that intercept outside threats coming through internet connections. FNTS also utilizes real time alerts and cybersecurity solutions that anticipate and mitigate cybersecurity risks, and Distributed Denial of Service (DDoS) protection which mitigates DDoS attacks before they reach your infrastructure. 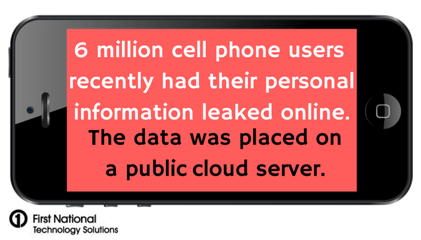 If data isn’t secure, it becomes vulnerable for exfiltration or breaches from hackers. Sensitive and personal information could be stolen. Recently, a leading cell phone and internet provider experienced a data breach and personal data of 6 million customers was leaked online. The data leak happened after someone placed the data on a publicly accessible cloud server. Scammers could use this information to access personal information. Stolen information isn’t the only problem that could arise if data isn’t secure. Systems could be compromised and infected with malware, similar to the recent Petya malware strikes that have been wreaking havoc in Europe. The majority of the attacks began in Ukraine, where infected systems spread rapidly. Countless computers became inaccessible due to infectious code spreading throughout networks. Some versions of malware, similar to WannaCry, demand a ransom in the form of Bitcoin before your files are released.

Data breaches aren’t going away, in fact, they’re on the rise. According to the Identify Theft Resource Center, there have been more than 774 data breaches reported so far this year, exposing more than 12 million records. In 2016, 1,093 breaches were recorded. At this pace, there could be as many as 1,500 breaches by the end of 2017. First National Technology Solutions has certified employees who spend their entire work day protecting and optimizing systems and analyzing trends to ensure that vast amounts of information stays safe and secure. 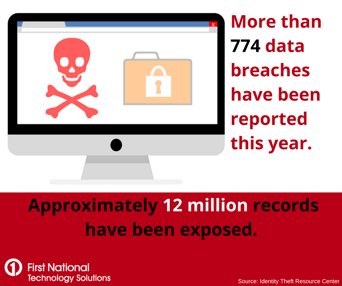 There may be warning signs to indicate if a server has been breached. If your computer isn’t running as it usually is or you suspect a device has been compromised, review the following warning signs:

-Network activity to and from abnormal destinations.
-Unknown processes executing in the background.
-Missing or encrypted files and folders.
-Unusual administrator activity or new accounts being created.
-Unusual scans or probing.
-Authentication attempts on several devices.

Sometimes, as is the case with the recent Petya attacks, malicious software may try to ruin the system, just to cause mayhem. Analyzing behavior against known trends via a SIEM can be extremely helpful.

With the increase in threats and seemingly constant lurking dangers to your information, diligence really is the best approach for foiling breaches. The best way to ensure your systems don’t become vulnerable is implementing frequent security patches, which are software and system updates. By frequently installing the newest updates you can stay up-to-date on security trends and make it that much harder for a breach to occur. This maintenance involves installing new updates in an efficient manner when they’re released. Other valuable practices include limiting network or system resources to only those that require certain levels of access, and removing or eliminating administrative access to only those who truly need it.  You should also practice a defense-in-depth security model by layering protections throughout your environment, as well as educating employees on the dangers of social engineering, phishing and potentially malicious files received from unexpected sources. Managing public, private or hybrid cloud environments requires additional due diligence and organizations should look at zero-trust, behavioral monitoring and identity/access management solutions to grant rights to users, as applications can reside anywhere.

FNTS is available to consult your business regarding security and privacy policies. You can email info@fnts.com or call 800.820.6924.

You can learn more about cloud implementation and security in the workplace  by downloading our guide.

Rick Kingsbury has joined FNTS as Vice President of Sales & Marketing. In this executive role,...

The digital transformation is underway in the utilities industry, with many public and private...

[Case Study] In Need of a HIPAA-Compliant IT Solution? Here’s What One Leading Software Company Did to Sustain Growth

When a large healthcare provider saw the writing on the wall that their existing IT...